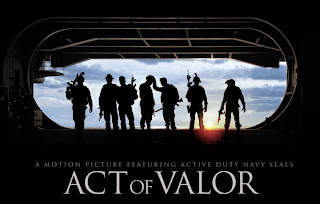 Unlike most weekends that find me working tirelessly during the day and reminding myself of my fleeting 20's at night, I took a respite to allow my body and mind a chance to recharge this past weekend. A spring cleaning (sorry folks in the NE that just suffered through Nemo but it was in the mid 60's in Charleston, SC) of the spirit of sorts. After some light reading, bathroom tile scrubbing, food burning, and channel changing, I landed on the recently released movie, Act of Valor.

The movie wasn't cast with Hollywood A-listers rather with actual active duty Navy SEALS. Although, at times, the delivery of lines falls a bit short of perfection, the story is not only topical and relevant but timeless as well. It speaks not simply to the heroism and bravery of this country's finest but to the primal battle each man and woman wages against his or herself in order to relinquish the restraint of personal demons and live a full life. While our missions are civil in nature, the adherence to them is equally as important as it is to SEAL Teams. Deviating from the orders that we give ourselves will often if not always result in a failed mission and a less fulfilled life.

The essence of entrepreneurship is no different, and those that succeed must also act valiantly in pursuit of their ambitions with neither fear of failure nor doubt of ability. At times setbacks become the norm and hope seems but the mirage of a former dream, but without hope of success, without the belief in our own capacity, without the courage to act valiantly and stay the course, we will forever remain impotent rulers as the kingdom of our own life erodes from beneath us.

Irony has it that a movie extolling the virtues of American Heroism would have a poem authored by one of its staunchest adversaries woven throughout; however, his words are timeless and embody much of what was once thought of as the American Dream, and with entrepreneurship on the rise, maybe one day it will again. The words of Chief Tecumseh


So live your life that the fear of death can never enter your heart. Trouble no one about their religion; respect others in their view, and demand that they respect yours. Love your life, perfect your life, beautify all things in your life. Seek to make your life long and its purpose in the service of your people. Prepare a noble death song for the day when you go over the great divide. Always give a word or a sign of salute when meeting or passing a friend, even a stranger, when in a lonely place. Show respect to all people and grovel to none.
When you arise in the morning give thanks for the food and for the joy of living. If you see no reason for giving thanks, the fault lies only in yourself. Abuse no one and no thing, for abuse turns the wise ones to fools and robs the spirit of its vision. When it comes your time to die, be not like those whose hearts are filled with the fear of death, so that when their time comes they weep and pray for a little more time to live their lives over again in a different way. Sing your death song and die like a hero going home.

Email ThisBlogThis!Share to TwitterShare to FacebookShare to Pinterest
Labels: act of valor, entrepreneurship